I am extremely proud to share with you my new book (my first e-book). It is in Italian, I tell stories of wonderful people making wonderful wines, in Abruzzo and other regions, and I explain a few technicalities on wine-making and wine-tasting.

Since October we organized several lessons, our Friendly wine-tastings to enjoy together all the flavours and hues I try to describe in the book, but you better taste yourself.

My motto is that life is too short to drink bad wine, and if you know how to “read” what a wine can tell you on how it was made, you can enjoy it better. Good wine, good company, good food and moderation  are my ideal recipe to enjoy life.

As soon (read: next year) as I can go back to our house in Abruzzo I am planning to get some work done on the family wine-museum my mom is dreaming about: with underground cellars on three levels and a natural cave in between, I am sure we can find the right space for all the vintage wine-making tools my great-grandparents used there.

Hope to see you there.

Bominaco is a small village in the province of L’Aquila, and you can easily reach it driving on Highway 17, and following the road signs that after San Pio delle Camere show you where to turn right and climb the mountain.This church is part of a former monastery which used to bevery large and mighty, much more than you would assume by seeing the remnants now. END_OF_DOCUMENT_TOKEN_TO_BE_REPLACED 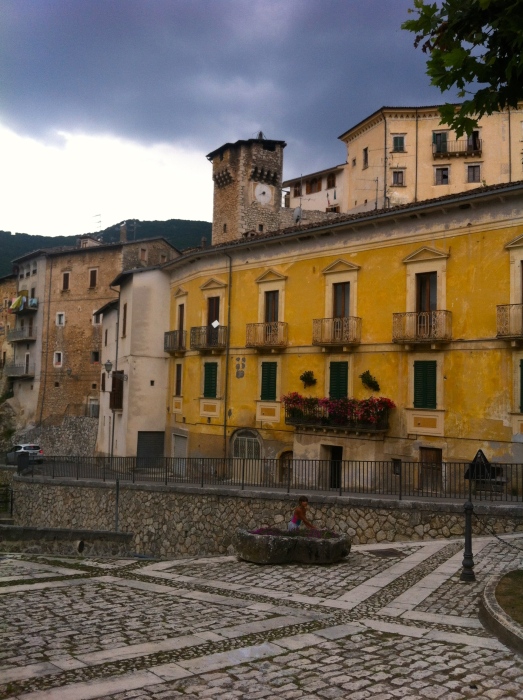 Fontecchio is a larger village on the Aterno river (Valle Subequana) and I just love the feel it gives when you just walk around a bit. END_OF_DOCUMENT_TOKEN_TO_BE_REPLACED

(please note the stone rings on the wall, to tie horses and donkeys)

Pedicciano is a tiny village on the Aterno-valley and belongs to the city Fontecchio, with more interesting monuments and buildings whose pictures you will see in a next post. It is the village of my Aunt Vittoria’s husband, zio Ginetto. END_OF_DOCUMENT_TOKEN_TO_BE_REPLACED

Getting to the villages of the plain by public transport requires some thoughtful logistic planning, because the last bus leaving L’Aquila and actually stopping in the villages and not just at the foot of the hills, leaves the Bus terminal at 6.45 pm. END_OF_DOCUMENT_TOKEN_TO_BE_REPLACED 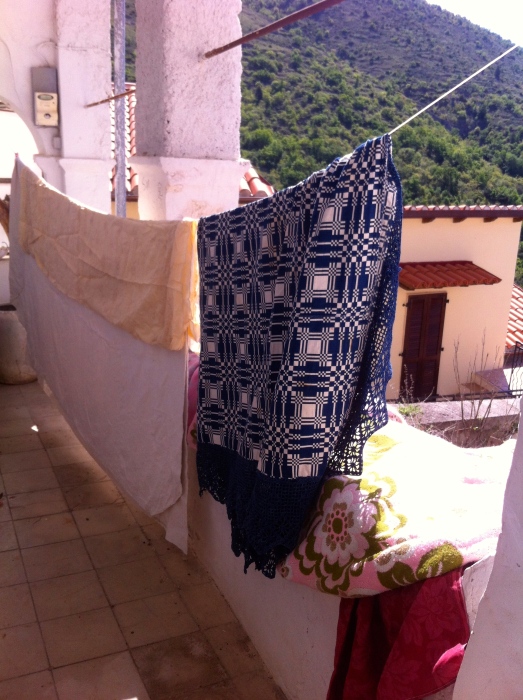 One of the “Catch 22” situations we got with the house since the start of the renovation project after the earthquake of l’Aquila, was that they classified it as inagibile. This means, in simple words, that nobody is authorized to get in there unless under supervision of a group of fireman, with helmets and all. END_OF_DOCUMENT_TOKEN_TO_BE_REPLACED

I totally agree with the view that the major shortcoming of all reconstruction projects  after the Earthquake of L’Aquila is that they are too directed to physical aspects rather than to the social, environmental and sustainable redevelopment of the area. It is people we are talking about, not just buildings.

I welcome therefore the announcement of this project:

“Social fragmentation and inequalities between the city and the countryside, now amplified by the negative effects of the earthquake, impose to find new shared places where building a community vision that would link the physical reconstruction to long-term strategies for a sustainable socio-economic re-development of the territory.

Our action is inspired by beauty, slowness, environmental and social sustainability.”

Community vision has always been the main feature of centuries of pasture and “open fields” management in this area. Due to the sparse resources, the only way to survive (and thrive) has been a common effort with all human development and family life revolving around it.

In the picture above you see me in the alley in front of my family house in Abruzzo. I am emptying it in view of the rebuilding.  After the earthquake of L’Aquila on April 6, 2009 our house, the whole medieval block ti belongs to, actually, was a bit damaged. considered the scale of damage in the whole province, I am actually surprised our house had only a few cracks in the parts of the wall where the building material was different. END_OF_DOCUMENT_TOKEN_TO_BE_REPLACED

When I was a student in L’Aquila we would go swim at the Lake of Sinizzo in June and July, just to recover between exams.

My neighbour had an old Renault and one afternoon the boys rang at the door asking if I wanted to join for a swim in 10 minutes. Sure, 10 minutes for a gal in between exams who did not yet had the time or the excuse to get out of het winter fur? God bless epilators, it took 15 minutes but I was ready.

So I discovered this small, lovely lake just outside San Demetrio dei Vestini, and all the fancy facilities it offered back then was a cement wall with a pool ladder on one side, and a huge tree with branches leaning above the water, where a rope and a couple of planks were enough for thekids to jump with high cries in the water, scaring the poor, innocuous, resident water snakes.

“Catch him, catch him” they started screaming, but the poor creature managed to escape.

So recently I went there with my niece Paula who just started University in L’Aquila at my old faculty in a new, fancy building with all facilities and a wifi connection (which in our old palazzo Camponeschi might have not been possible due to the huge, stone walls, but alas, Palazzo Camponeschi has been destroyed in the earthquake of 2009). Because if you are a student in L’Aquila you must know how to get there in summer. 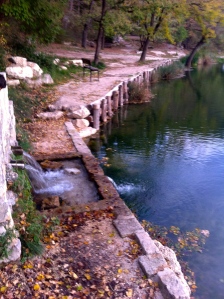 And talking about earthquakes, back then it was almost feared the lake would disappear, as the seismic activities caused large cracks in the ground and at the bottom of the lake, which is actually more of a sink-hole.

Luckily this did not happened and the two sources feeding the lake are still there doing their job.

And the great and crisp fall air and light added to the charme of this beautiful place, that since my student times has been furnished with pic-nic tables and a great playground for the kids. 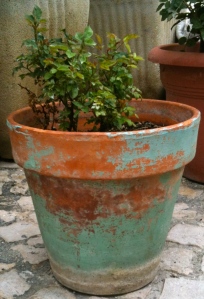