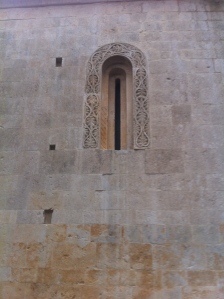 Bominaco is a small village in the province of L’Aquila, and you can easily reach it driving on Highway 17, and following the road signs that after San Pio delle Camere show you where to turn right and climb the mountain.This church is part of a former monastery which used to bevery large and mighty, much more than you would assume by seeing the remnants now.

I quote: “… the Benedictine center of Momenaco, already existing in the 10th century. Founded according to tradition in 1001 by Odorisius, son of Bernardo di Valva, this abbey is one of the masterpieces of Abruzzi’s Romanesque architecture.”

There are a few beautiful things to visit (explained here) and the view is wonderful. To me it has a special meaning. It is such a forgotten place that in the late years Seventies we heard about it from a Polish friend living in Rome, who read about it in the Vatican newspaper, L’Osservatore Romano.

My father, who knew a bit all the surrounding villages never heard of it. But once arrived, he informed around and found the house of the old lady keeping the keys of the Church, and so we could visit it (my father had a way of talking to people and wherever we went in the province, he would always find someone he knew, or at least one of their relatives).

It is peculiar how many places are almost forgotten nowadays, while in old times had a prominent role. Bominaco for example, used to be an important point on the route between the Adriatic Sea and Rome. That’s why I feel it is important to visit them and write about them, even if my pictures are not that great.

Later on the place became more known, and a system of volunteers was set up to act as guides. Some of my friends married in the church, at other visits when we arrived there there  was a funeral of someone of the village. When the kids were young they were more interested in playing in the pine-wood and rollling on the grass down the hill than in the frescoe’s, and that’s ok too..

As you may see from the pictures part of the building materials were taken from the neighboring pre-Roman city of Peltuinum whose remains are not too far from here to visit. This form of recycling has been going on for centuries. 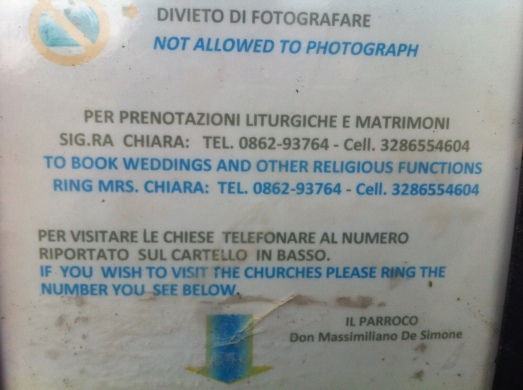 If you are interested in visiting the church or booking it for private religious functions, call the number in the picture above. It is absolutely worth the detour, and in a next post I will show you the even more impressive frescoes’ of the contiguous Oratory of St. Pellegrino.

What I did not manage to photograph for lack of time and light (we sneaked in after the funeral, while they were closing) are: the pillar holding the Easter candle next to the Altar, which is very impressive, the three apses (you see them from the outside, is a pretty rare feature for the area and the time) and more sculpted stone details.

After visiting do not forget to leave a contribution with the guide for their time and to help with the maintenance costs.

I am leaving you with a video to get a better idea: